This is an Open Access article distributed under the terms of the Creative Commons Attribution Non-Commercial License (http://creativecommons.org/licenses/by-nc/4.0) which permits unrestricted non-commercial use, distribution, and reproduction in any medium, provided the original work is properly cited.

Background: In many countries, surveillance systems are being operated to reduce healthcare-associated infections. In Korea, the Korean National Healthcare-Associated Infections Surveillance System (KONIS) has been established and operated by the Korean Society for Healthcare-Associated Infection and Prevention as a national research project. However, the current operating system has limitations and needs reform
Methods: Upon reviewing the literature, we investigated the current status of the operating systems of healthcare-associated infection surveillance in other countries. After sharing this literature review, which was gathered using Google and PubMed, the Delphi survey was conducted on the authors, who are experts on infection control and prevention.
Results: The governments of the United States, Japan, Taiwan, United Kingdom, France, and Germany fund and operate surveillance systems. The Canadian government provides a private organization with funding to operate the surveillance system. One surveillance network is operated by a private consortium in which private medical institutions from various continents, such as Latin America and Africa, participate. In a Delphi survey, the authors responded that continuity∙sustainability, and the reliability and confidentiality of data are key factors in operating surveillance systems. Additionally, eight of nine authors thought that the government should operate the KONIS.
Conclusion: In most countries, healthcare-associated infection surveillance systems are directly operated by the government. For the continuous and stable operation of the KONIS, the government should consider transitioning to a government-operated system. 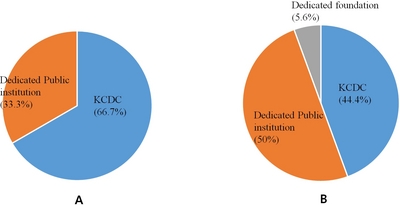 Figure 2. Results of Delphi survey on preference of operating systems for the Korean National Healthcare-associated Infections Surveillance System. (A) The choice of the first priority. (B) Composition of choices of the first and secondary priority. Abbreviation: KCDC, Korea Center for Disease Control and Prevention.